Exploring the world, one step at a time 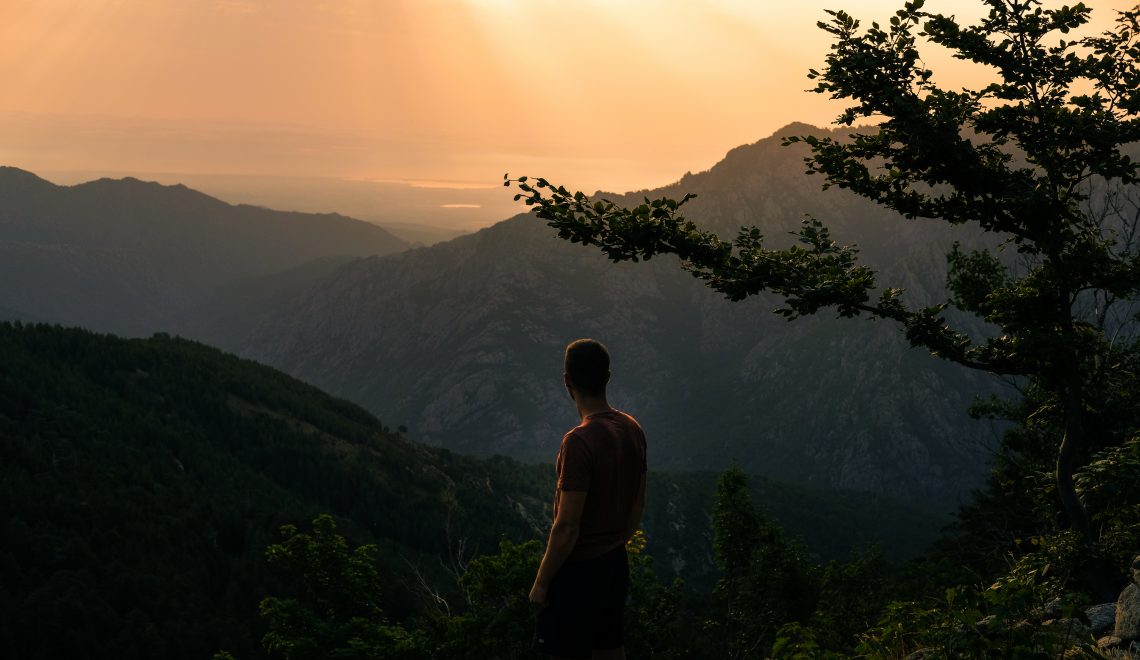 As I’m writing this I sit comfortably in my home, watching the night change to dawn. I meant to write this sooner but simply didn’t get around doing it. My excuses are bad internet connection and sheer lazyness. Oh well, here goes.

Last time I posted, Luuk and I had just finished the Northern part of the GR20 and we were about to start on the Southern part. We were celebrating with a pizza overdose and a mojito. Since we were unable to finish our second pizza, we decided to pack it out for lunch the next day. It was good and made us wish we packed out more pizza. At this point in time, our hunger was permanent. You eat untill you’re full and immediately after you’re hungry again. Normally I don’t go big on candy, but on trail I eat a whole chocolate bar every day for what Luuk and I call second breakfast.

The Southern part started out very easy compared to the Northern part. For a while, the path was smooth and didn’t try to tear off our ankles or crush our knees and souls like in the Northern part. It might not have been as spectacular as the Northern part, but Luuk and I both enjoyed it. We hiked mostly through forrest. Stately pines and tall beech trees sheltered us from the burning mediterranean sun and cold streams helped refresh our wanderlust. At some point, a large swath of forrest had been destroyed by a wildfire. We both felt very melancholic about it.

Stage 12 forced us from our woodland wonderland back to the high mountains with their soul crushing ascents and knee crushing descents. Luckily, my knees felt much better than a few days prior. Even so, it was a hard day. First we ascended some 500 meters up to a ridge. We would follow the ridge for the rest of the day. Now there’s two things you have to know about ridges. One, they offer amazing views to both sides. Two, they’re never level, or smooth. To be honest we didn’t enjoy the awesome scenery to the fullest as we were allready fully occupied with cursing the many many many ascends, the heat, the burning sun, the sweltering fog on the east side of the ridge and all of the rocks in between us and the next hut.

We were quite tired and ready for a shower by the time we reached the Usciolu hut. Unfortunately, the showers were temporarely out of commission. Instead, we shared wine and cheese with some new friends we made. There was an Italian couple called Tommy and Silvia, a German couple called Arne and Brenda, the quintessentially Bretognese Thomas and a Canadian-British-French woman who didn’t want to have her good name besmirched by my blog (just kidding, she cares about her privacy). Anyway, back to the wine.

After the first bottle, a second followed. Then we discovered that the hut had stocked up on the local strong liquor called Myrthe. A bottle was tested and approved of. More bottles followed. Just when the party was winding down and all our friends had left, Thomas reappeared with two more bottles of Myrthe. He insisted we joined him, ‘for quality control’. Needles to say, when I finally made to to the now functioning showers, I wasn’t walking too straight.

Later that night, I took some photo’s of the Milkyway. The Milkyway has been a constant throughout the hike. From the first day untill the last day of our hike we got to see it every night (except for when the storm hit). There’s something magical about falling asleep under the stars that you can’t quite grasp untill you’ve experienced it yourself.

The next day was miraculously short of hangovers but big on scenery. There were two options for us to consider. Originally, stage 13 was quite long, forcing hikers to ascent the lonely Monte Incudine during prime thunderstorm hours in the afternoon. Recently the GR20 was rerouted to Refuge de Matalza to add an extra day of hiking. Because an extra day of hiking meant a day less at the beach, Luuk and I opted to take the old GR20. It was amazing.

At first, we continued along the same ridge that had tortured us so much on the previous day. It offered amazing views in the golden hour right after sunrise. After the ridge came a beautiful forrest with open meadows, gently rising and falling as we hiked down from the ridge. Somehow the place felt super restful and we ended op going quite slow, not wanting it to end. After the forrest we crossed Plateau du Cuscione, a high level plains dotted with small forrests and crossed by cold rivers. After the plateau, the only thing in between us and the next hut was the towering Monte Incudine.

A smart person would have pressed on quickly, hoping to beat the afternoon heat. We, on the other hand, decided to go for a long break. Together with Tommy and Silvia we went for a swim in one of the rivers. After that, we ate a long lunch. After that, we were plain lazy. In the end, it meant we had to ascent Monte Incudine in the full heat of the day, the sun burning hot on our necks as we slogged uphill for two hours. Still, it was two hours well spent because the views were amazing to all sides.

The next day I felt ill. Not much to say about that, other than that it was pure torture to hike uphill with belly cramps. Not recommended. I was happy to reach the touristy Col de Bavella, where we rested on a shaded terrace for the whole afternoon. Afterwards, I felt much better and we continued to the final hut: I Paliri.

I Paliri is a noteworthy hut for three reasons: the guardien, the views and the sanitary. The sanitary is by far the worst of any hut on the GR20 (a questionable prize indeed), the views are the best, with green pineforrest intertwined by rocky ridges. Sunset and sunrise give the place a magical glow. The guardien himself is an awesome man, clearly prioritizing music over anything else. During the evening, he played many Corsican songs and French chansons. It was a great place to stay.

As it was the final night, celebrations were in order. Given my illness earlier that day I stayed well away from the wine. Luuk, Arne, Brenda, Tommy, Silvia and the British-Canadian-French lady didn’t though and the amount of wine drunk that evening was truly impressive. The same wine was responsible for a slow start the next morning (that and because I sang some songs with the guardien). All fine with me. It was the last day and I wanted to savour it.

All thoughts of savouring disappeared when the heat began to rise. The hike down the Conca (endpoint of the GR20) is full of nasty climbs. At this point, each uphill section felt like an uppercut. Don’t get me wrong: the hiking was beautiful and the scenery superb. The heat was simply overwhelming. A bath in a cool river brought some relief, but one minute after we left we were again dripping with sweat.

Arriving in Conca was a relief. We celebrated the only way we knew how: by eating and drinking. Luuk and I had a coke, icecream and two panini’s in Conca. After that, we took a bus down to a campground near the beach. There, we ate pizza and drank wine. At that point, it felt like heaven. Our self induced suffering had come to an end and we had completed one of the most notorious hikes in Europe. We were rockstars.

Looking back, I feel gratitude. It was an amazing trip and I had loads of fun. I want to thank everyone with whom I hiked, shared wine/Myrthe/beer. Especially, I want to thank Luuk for his patience when I set about to photograph and video every millimetre of the trail.

That’s right, there’s a short documentary about the GR20 coming up! I took with me a professional camera and went through great pains to get footage. It might take a while to process all of the 250 gigbyte of material, so keep checking the website. Eventually, it’ll be there. Untill then, cheers!